On Friday, May 25th, we’ll be playing a free, all ages show with our friends Sodium Fox and Semi-Deluxe at Soundwave Studios in Oakland! 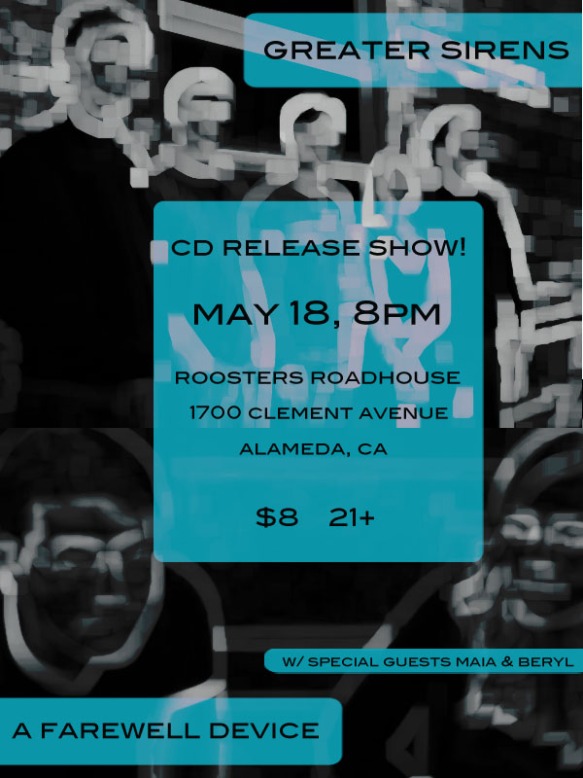 We will be playing at Roosters Roadhouse in Alameda on Friday, May 18th. This will be the CD release show for our new EP, For the Birds, so don’t miss it! You can also download digital copies of For the Birds at http://greatersirens.bandcamp.com

Also playing are A Farewell Device and Maia & Beryl!

Our debut EP, For the Birds, has finally arrived! If you’d like to order a copy from us directly, send us an email at greatersirens@gmail.com. Otherwise, we’ll have the EP available at our shows, the next being May 18th at Roosters in Alameda.

For the Birds will also be available on iTunes and other online stores within the next week or two, and we’ll announce that as soon as it’s up.

After months of recording, mixing, listening, and making changes, our debut EP, For the Birds, has finally been sent off to be pressed! We expect to have it available for purchase at our shows and online by early May.

For the Birds was recorded at Fantasy Studios in Berkeley between April and July, 2011. It was engineered by Jesse Nichols, who also co-produced with us. The artwork was designed by Randall Jue.

We will announce the release date soon!